My, my, check out the front page article from USA Today last week. It's about the whopping growth rate of Idaho, including one 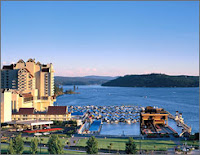 specific town in the state--Coeur d'Alene. This photo from the article looks mighty familiar to me. Inch the camera a smidgen to the right to take in a little more of that forested hill, and you'd see our house in the middle of it. (You can enlarge the photo at the USA Today site.)

Coeur d'Alene is growing very rapidly. Now that we have a house there, it's kinda funny. We tend to join with all the other Idahoans and say, "Welcome to Idaho. Now go home."

In our defense, we've done nothing to change the landscape. One family moved out of the area, we bought their home on around 11 acres, and moved in without changing a thing. It would be a different story if we broke up that acreage and made five two-acre lots out of it. That's the kind of thing we're seeing a lot of in Cd'A. The prairies are really being eaten up. New developments everywhere.

When you click over and
read the article, look at some of the comments. Idahoans are knocking themselves out tearing down the article. "Aah, they don't know what they're talking about. Believe me, it's terrible here! Overcrowded, ugly. Do yourself and favor and move to Nevada instead!"

Fascinating piece, Brandilyn. Even more so because I was just vacationing in Idaho (about 40 miles south of Coeur d'Alane. We drove from Boise up there and got to see a lot of the state. The fires were still going on, so we didn't get to head south like I had hoped (I need to see the Sawtooth Mountains!), but it was all still beautiful.

It's too late for the Greater Seattle area. We tried everything to discourage the onslaught of Californians, etc., ranting on and on about the constant rain. Nothing worked. They're here now. It's sad. Most of them have joined the mantra: "Don't move here. You'll just hate the rain." Smirk.

We're thinking of moving to Idaho. :)

Even here where I live near Lake Lanier north of Atlanta, things are changing so fast. We were in the country when we moved here in 1995. Now ... sheesh, I'm in the middle of the city. It grew up around us!

I wish they'd go away! We were here first! :-P (j/k) Moved to the Coeur d'Alene area in 1998... but weren't in a position to buy a house at the time... and now that we are, we can't afford anything! I mean... we don't have a house in California to sell or anything, so we would have to make mortgage payments out of just our pay checks... and I don't see that happening, not at the prices real estate is going for these days. We are hoping it will level off and come back down some, but we're not holding our breaths. In the meantime, we continue to rent. It is so gorgeous here... I can't blame them for coming... and staying! We did! (Oh, wait. I didn't say that. No. Really. You'd hate it here. I know you would. Don't even bother to look.)

Beautiful picture. I'd love to visit. In the back of my pea brain, I think I'd love to live there, but let's face it, I'm freezing when it's 69 degrees.

I can imagine though how residence don't want it to change. Beauty should not be messed with.

We visited Coeur d'Alene when I was a teen and thought it was just beautiful. Is there still a restaurant there in a hillside called "The Sourdough"?

Nope, Susanne, I haven't seen that one.

Sounds like us when we lived in Orlando and Tucson. We watched Universal Studios go up beyond Lake Marsha where we lived. We could see the Bates Motel before we moved away! And Arizona used to be full of running rivers. No more. If anything causes local warming, it's concrete and roofs eating up shade and water.... And who wants all those mosquitos and rattlesnakes? Yes, indeed, go home! LOL