My Latest Release Hits the Shelves 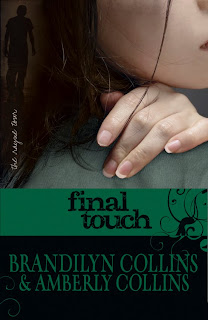 Final Touch follows Shaley O'Connor in the most harrowing days of her life. She is kidnapped just moments before a very special event. Who is this man who has taken her---and why? As the FBI races against time to find her, Shaley's abductor eludes them at every turn. Fearing for her life, Shaley wills herself to stay strong. But as the days pass, she realizes that no one can save her but herself.
Four teenage girls wrote the insightful reader questions for Final Touch, included in the back of the book. "I love this series!" one of the girls wrote. "And Final Touch is the most exciting book of all!"
Seeing all three books in the Rayne Tour Series hit the shelves has been a wonderful thing for me as an author and mother. Of course, life is hardly fair when a 16-year-old gets offered a three book contract, and her mom had to work like a dog for 10 years to be published in fiction. But our mother/daughter team worked splendidly from the beginning. Amberly and I both created the series and characters and plotted the books. I wrote the stories, and she edited to make sure the 16-year-old protagonist's POV was right. Last year at ICRS we signed books on the convention floor. 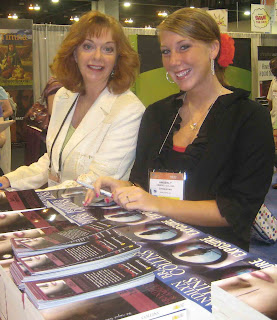 Feedback on the series has been great. One of the best things is hearing from families--where two to even three generations are reading the stories. The Rayne Tour Series is suspense. At the same time it explores personal issues, such as Shaley's relationship with her mother and her search for her unknown father. Along the way, Shaley and her family began to see that there's a God who's "Always Watching" and whom they can turn to for help in difficult times--and in their daily lives.
If you haven't read Always Watching, book #1, and Last Breath, book #2, I do suggest you start at the beginning of the series. While each suspense story is self-contained, the character arc and personal issues build throughout the three books.

Congratulations. I just finished 7 Secrets book, and loved it. Looking forward to reading more of your work.

I agree about this being a series the whole family can enjoy. My 12 year-old daughter gets to read them first and then passes them on to me. There's not a lot of books we can say that about.

Ordered it earlier today for my girl! She LOVED #1 & #2. I always give my kids books on the last day of school and that will be in her bag!

Big Congrats, Brandilyn! I'm sure it never gets old seeing a new book on the shelf!

Congratulations! It must be so much more special being able to do this with your daughter.

Very cool. (And great covers for this series.)

You two are dah-ling! I can't wait to pick up this series and I'm putting in an order for a young mens series to hit selves in...lets say... 3yrs! :)

Congratulations!! Can't wait to read it!