With all the buzz about The Shack, I figured it was time I read the book. I'm glad I did. I can see why this book has generated over half a million sales mostly by word of mouth. It's the kind of book that makes you want to say to someone else, "Have you read it?" 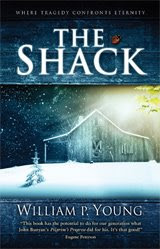 If you've been vacationing on a desert island and haven't heard about this book, here's the short scoop. It's a novel about Mack, a man carrying a terrible grief. Mack meets God in His Trinity. God, the Holy Spirit, and Jesus--in forms you wouldn't expect--tell Mack a few things about God's love, evil in the world, and Mack's grief.
The Shack isn't a novel you pick up for the story, so much. It's not really about entertainment, as most novels are. It's a book you read because of its insights about God and His love. These insights are fresh and make you think. The Shack is a wonderful book for a discussion group.
The Shack was originally self-published by Windblown Media, which was formed to publish this book. According to The Shack website, as of April 8 the book had climbed to #33 on the USA Today Top 50 Books, and had risen as high as #7 at Amazon in all books and #6 at Barnes and Noble for instore sales. Discussions are now underway with "major New York publishing houses" to help "release this book to its widest possible audience." And the pre-production phase of transforming The Shack into a feature-length film has begun.
As I read I found myself soon looking for a pen to underline--something I rarely do in a novel. There are so many wonderful quotes from the Trinity to Mack. Here are a few of many that struck me. (I must add they are more hard-hitting within context.)
When all you can see is your pain, perhaps then you lose sight of me.
Humans are not defined by their limitations, but by the intention I have for them.
Do you realize that your imagination of the future, which is almost always dictated by fear of some kind, rarely, if ever, pictures me there with you?
Lies are one of the easiest places for survivors to run. It gives you a sense of safety, a place where you only have to depend on yourself. But it's a dark place, isn't it?
(On the question of why God allows evil in the world.) Evil ... is the chaos of this age that you brought to me .... If I take away the consequences of people's choices, I destroy the possibility of love. Love that is forced is no love at all .... You demand your independence, but then complain that I actually love you enough to give it to you.
Mack to God: I just can't imagine any final outcome that would justify all [the pain in this world]. God's answer for the Trinity: We're not justifying it. We are redeeming it.
I highly recommend this book. It focuses on God's love, not His judgment. At the same time, it doesn't present God as some avuncular being who simply loves everyone and doesn't care how they live. At one point Mack asks Jesus if "all roads" lead to Him. "Not at all," Jesus replies. "Most roads don't lead anywhere. [But] I will travel any road to find you."

Thanks Brandilyn. It's good to read your insights. I'm part of the BHCC, so I haven't picked up this book (it seemed to fit into that genre ;), but I have read many of the reviews on Amazon, and ooh boy, what a range there are.

Just so you know, I do pick up your books for my mom, who is fearless ;0

Thanks Brandilyn because clearly I'm on one of those islands. Hadn't heard about this one but it sounds intriguing. Love the quotes about most roads leading to nowhere and imagination almost always being dictated by fear.

Gotta get this one.

I've heard more "Well . . ." and "Hmmm . . .", and "The theology is skewed" about this book than I have anything else. Interesting responses.

I read the book, but I can't recommend it. It contains highly questionable doctrine. If we do nothing else, we should stay true to the principles of the word of God.

Young's statement that "most roads don't lead anywhere" is not consistent with the Bible. First, Young does not say that there is only one road to heaven and instead implies that there may be more than one. Second, all roads do lead somewhere. (see Matthew 7:13; John 14:6) The problem is that most roads lead to the wrong place.

The success of Young's book doesn't surprise me. It preaches a feel good doctrine that history has shown to be very attractive to many people.

Yeah, I heard some "skewed theology" reactions too. But when I read the book I was surprised not to find so much of that. I agree with Timothy that it would have been great to see a definite statement that there's only one road to God--through Jesus. But I maintain that this book will do far more good than harm. It does open people's eyes to God's love and answers basic questions of how He allows evil to exist for now. And I don't think it's "feel good" theology. It's less than "feel good" to be told to trust in God as He allows evil in the world, or to hear we should forgive all who have harmed us and allow God to deal with them instead.

Another point. We have to remember this book is fiction, not non-fiction. While many of its points are explicitly made, some, through the very nature of the story, are implied. For example, although nowhere in the book does God say, "Jesus is the only way to Me," the story makes it clear that Jesus is God's son, that He is a crucial part of the Trinity, and that you cannot accept God and follow Him without following Jesus.

I know this was yesterday's blog post (I get them a day late through Feedburner)but I found it very interesting to have it pop up in my inbox today at the same time as today's edition of Chuck Colson's "Breakpoint"- in which he discusses this same book - with a different take than Brandilyn's. (grin)

If anyone is interested, you can find Colson's article at: http://www.informz.net/pfm/archives/archive_597026.html

I think I've been on that deserted island, too. Never heard of the book until today.

I have read The Shack. I, also, highly recommend it. However, if a person is a skimmer, they will miss most of the profound thoughts hidden in the middle of paragraphs.

Not wanting to give too much of the book away, I didn't mention the personification of God as an African-American woman named Papa, but the other article recommended to the ACFW Loop that was more negative to the book tells about this.

With Mack's background, God knew that he wouldn't accept a father figure when he first came face to face with God. However, after Mack deals with his past, God then appears as a man to him. That in itself is a profound statement, and several people I've talked to who read the book missed that. I believe it's because they skimmed, instead of reading every word.

There are a lot of people reading this book and loving it, a lot of them are Christians! This is very sad! It speaks so well of the need for a relationship with God, not just head knowledge. But then it goes about destroying the very foundations of that relationship! The images of God in the book are idolatrous (making God into our image) and lacking in true holiness, power and authority. A very sad god indeed! who only seems to know how to cook and crack jokes. He/she is the god of my nightmares not dreams! An impotent god, having to bow to the whims of every man's choice and only able to fallow him around with a dust pan, trying to clean up the mess! How very sad indeed. It was all I could do to get through the book without throwing up. I have met with God in my own "shack" and He never justified Himself or explained Himself. He simply WAS and that was all I needed to know. His very presence makes everything right... makes everything "good". When He enters a room it becomes a holy place of worship, awe and wonder and you realize you are a man or woman of unclean lips in need of being made clean and in need of repentance, whereas He, is without spot or wrinkle and all together lovely