Ruthie Bowles once said I would wind up hating her. She was right.

This book is told in first person from various points of view, each chapter having a subheading as to what character is talking. I'd recommend this novel to the literary-minded reader. The plot unwinds slowly, with a lot of interior thought and general angst among the characters over all that's gone wrong in their lives. Revelation as to what has happened in the past to cause all the trouble is slow in coming. If you're a fast-pace kind of reader, you're likely to find this novel ponderous. But if you enjoy character-driven novels such as from Leif Enger or Lisa Samson, I suggest you give this one a try. Chris is a new writer to the adult market, although he's written many young adult novels. You just may find yourself a new author to follow.

Chris Fabry has a variety of titles to his credit including At the Corner of Mundane and Grace, Spiritually Correct Bedtime Stories, Away with the Manger, The H.I.M. Book, and The 77 Habits of Highly Effective Christians. His latest work is a collaboration with Jerry B. Jenkins and Dr. Tim LaHaye.

Chris has recently completed the final book in the Left Behind The Kids series, available Fall 2004. Readers of all ages have followed the lives of Judd, Vicki, Lionel, and the others. Now read how their exciting stories culminate in book 40 of this beloved series. Dogwood is his first adult fiction.

Chris and his wife, Andrea, are the parents of nine children and make their home in Colorado. Chris has worked in Christian radio and now enjoys narrating audio books as well as writing. He believes his career as a husband and father is the real evidence of God's grace in his life. 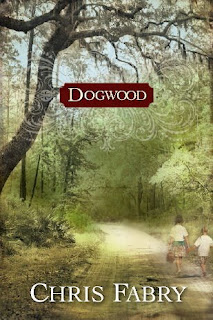 In the small town of Dogwood, West Virginia, Karin has buried her shattered dreams by settling for a faithful husband whose emotional distance from her deep passions and conflicts leaves her isolated. Loaded with guilt, she tries to raise three small children and "do life" the best she can.

Will returns to Dogwood intent on pursuing the only woman he has ever loved--only to find there is far more standing in his way than lost years in prison. The secrets of Will and Karin's past begin to emerge through Danny Boyd, a young boy who wishes he hadn't survived the tragedy that knit those two together as well as tore them apart.

The trigger that will lay their pain bare and force them to face it rather than flee is the unlikely figure of Ruthie Bowles, a withered, wiry old woman who leads Karin so deep into her anger against God that it forces unexpected consequences.

If you would like to read the first chapter of Dogwood, go HERE.

I absolutely loved this novel. I hope Chris continues to write for adults along with young people.

I would agree it's on the edge of being a literary novel. The protagonist just seems so real to me--his inner dialogue, I guess.

Not sure I liked the ending, but the writing made up for any faults I might have found in plot lines.