Are you the huge fan of Discovery Channel's Planet Earth that I am? If so you won't want to miss the follow-up series called Life, premiering this Sunday at 8 p.m. Eastern and Pacific times. Turn on your TIVO and tape it. 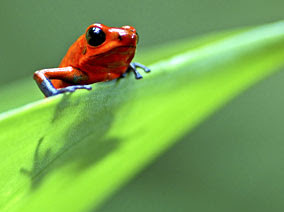 Here's the line-up of the 11 episodes.

You can preorder all the series' DVDs for $59.95 from the Discovery Channel. I don't see any page for it yet on Amazon. Perhaps that will come after the series. Amazon is selling Planet Earth for $55.99, which portends that its price for Life won't be much less than the Discovery Channel price. If you've never watched Planet Earth--these DVDs are worth buying. My husband and I bought the series and haven't regretted it. The photography of wild life is simply amazing. I can't watch these DVDs of nature without wondering anew at the amazing creativity of God.
Posted by ~ Brandilyn Collins at 6:00 AM

I haven't seen it, so I have a question: Does it talk a lot about evolution, global warming, or a lot of "save the animal" stuff? Not that I'm against protecting animals, but a lot of times I've seen people, especially Animal Planet and the Discovery Channel, carry on with it so much it's almost like they worship the idea.

I'm glad to know you like it. I sometimes have problems with their viewpoint, so it's good to hear you like this one. I'll be watching.

"Their viewpoint" meaning Discovery Channel's, Ane? I don't know about that. I don't tend to watch the channel all that much. I do know, if LIFE is like PLANET EARTH, it doesn't talk about saving the environment, it simply shows nature in the most amazing photography you'll ever see. The film of certain creatures takes months, sometimes years, to get. Stunning, really.

We bought the series at Costco. Love to watch them with the kids. Next up is Blue Planet.

I find shows like this invaluable as a Sci-fi writer. If you ever need inspiration for some kind of bizare creature or plant, you don't really have to look too far within God's incredible creation to find something that looks like it belongs on an alien planet. :)