Okay, you know the drill. Write the best caption for the crazy picture--win a book. Come on now, get creative with this one. Come back sometime over the weekend to see others' captions and vote on your favorite. Winner will be announced next week. If there's a tie--I'm the tie breaker.

Facebook friends--it's fine to leave your caption as a comment on FB, but be sure to leave it here as well, so everyone can see it for voting.
And we're off! 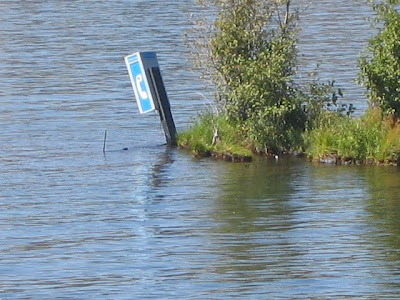 Posted by ~ Brandilyn Collins at 8:17 PM

Ariel decided to break up with Prince Eric by phone.

It was only sprinkling when I started talking. . .honestly.

Perpetually without small change, Aquaman longs for Apple's release of the waterproof iPhone.

Progress! Noah can now use the pay phone instead of the dove!

Hello, Central? Get me Heaven.

I'm not talking to you any more. You're all wet.

Ahhhhh, for a land line!

Did you know fish could talk?

Has anyone seen the phone book?

Discouraged by the latest Apple iPhone sales figures, the old pay phone decided to hang it all up and wade out to the great phone bank of the deep.

Even Sea Monsters have to call their moms on Mother's Day!

On the next episode of "Extreme Makeover: Phone Edition"...

"There's water in the basement Earl! I can't get to the phone!"

"Well, drive down to the pay phone to call a plumber."

Hello Operator...get me through to Washington right away...I need a bailout!

911 What is your emergency?

Are you there Sir?

You've heard of "the call of the water", haven't you?

I know the breakup caused you to cry, but this is ridiculous.

Do you ever get that sinking feeling?

Don't call us we'll call you!!

I guess you can't hear me now.

I'm way over my head in phone charges.

I vote for Jason; it made me laugh pretty hard.

Thanks for the chuckles!

I vote for Edwina!

I vote for Pat

It's a tie between teachergrl and Marcia Moston for me!

I vote for Jenny's and the bailout!

So many good ones to choose from!

I vote for Edie Melson's. Great play on words.

I vote for Michael.